Several months ago I joined my local PFLAG chapter. It was important to me to join because of the people in my life that I love. My friends and family fall all over the orientation and gender identity spectrum. We engage in various conversations about their experiences, and I have provided what support I can listening, learning, and acting as an advocate for them with other groups I am a part of (such as talking with co-workers, or my writers’ groups).

This weekend I joined other PFLAG members in representing the organization in Gainesville’s annual Pride Parade that headed down a stretch University Avenue, near Main Street. The first part of the route there were a few people on the side of the street waving, and cheering each group by name, but as we got closer to Main Street and the Pride Festival that was happening downtown, the crowd grew. Rainbow-clad and happy, a mix of adults, youth, children and dogs, the crowd’s energy feed those who were walking the parade, and we reciprocated by waving rainbow flags and offering up “PFLAG loves you.”

It was a bit of surreal experience, given the prominent street we were just strolling down mid-day. The east-bound traffic had been stopped for the parade, but the two west-bound lanes still operational. We did get a few honks, which was nice. That and the energy from the ever increasing crowd made me forget how hot the day was, and filled me with the apt emotion – pride for being part of such a loving and supporting community, and gratitude that my local friends and family are able to experience a grand outpouring of that love on a fine fall weekend. 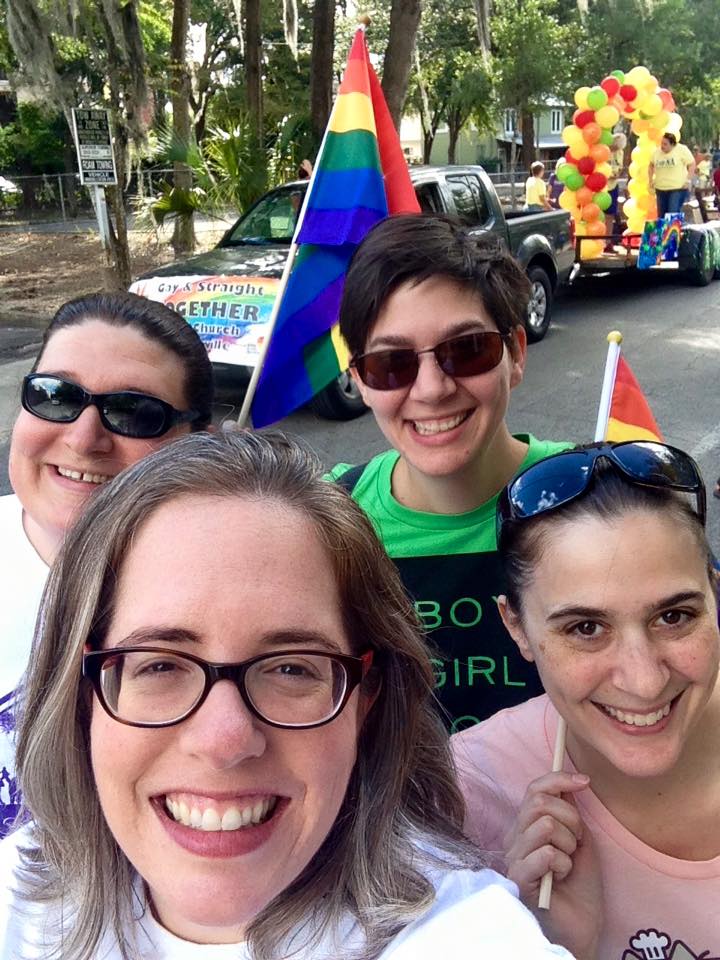 Kate, Allyson, Anne and I prepare for the Pride Parade; Photograph by Allyson Haskell

This site uses Akismet to reduce spam. Learn how your comment data is processed.