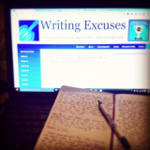 Writing Excuses, season 10, episode 5 (http://www.writingexcuses.com/2015/02/01/writing-excuses-10-5-what-do-you-mean-my-main-character-is-boring/) homework: Take three different characters and walk them through a scene. Convey their emotional states, their jobs, and their hobbies without directly stating any of those. The scene in question: walking through a marketplace, and they need to do a dead-drop.

Robert stormed past the silks merchant, and didn’t bother to apologize – or even stop – when he knocked the rack of batik scarves into the muddy street. I’d be his luck if Lucio picked up the complaint, but even that he could live with. As long as the bastards who’d roped him into this were caught. He’d perform to the letter of their demands – it was the only way to ensure Viol’s safety, but he sure as hell planned to trod all over the spirit.

Next right, two doors past the milliner’s. He couldn’t bring himself to knock the newest sun hats to the street, but he bumped hard into the table, and grinned fiercely when the awning post fell, dropping the floral cloth to the great protest of the woman behind the table.

That should be enough  to get the cameras to follow him, but sometimes Miller could be stodgy, especially if she thought she could save money, so he swung the wretched black bag into a stand of cheap paste jewelry, knocking dozens of impressive looking fakes to the ground and stepping on a few for good measure. And because this shop had a reputation for some real forgeries, though he hadn’t yet been able to prove it, even Miller couldn’t ignore this. Reigning in his pace, and slipping a placid look on his face, though he was cure his eyes would give him away if the scum were close enough to see, Robert turned the corner and approached the drop site.

Abi couldn’t help looking over her shoulder. Again. There was no one following her that she could tell. Again. She’d been certain that Mike and his wire fox terrier were following her, but they turned off at 2nd, and she remembered that was the regular walking path from when she’d watched Beauty last year.

She tucked the messenger bag more firmly under her arm, the preservation box digging into her side as she sucked air in through her teeth and focused on keeping her eyes forward. Just act natural, she thought, rubbing ink-stained fingers over her damp palm. Natural.

The light at Pine was flashing, and she jogged across, side-stepping what looked like a corgi- retriever mix, and slowed to a normal walk. She just had to get to the picnic table on the north lawn, find the identical bag, and make the switch. Keep walking with whatever the hooligans on the other side of this grand scheme thought an original Shakespeare folio was comparable to, at least in shape and size.

Rubbing her hand on her pants, Abi entered the shop-lined park and glanced around. Full with the after-5 walkers, like she expected. She looked at the table, saw the abandoned bag. But a pair of poodles was headed that direction, their owner’s attention on their phone, but still, best wait a minute.

She shifted the bag again and took three measured breaths, wondering how they would have chosen the size of the replacement, and hoping it was information from wikipedia, the same information she had used to create the forgeries in her bag.

The path cleared, and with one last deep breath, Abi headed to the table.

Twitch didn’t like doing the dirty work. That’s what grunts were for. Only there weren’t any around. In lock-up, or scared off by The Johnnies. Or worse, in rehab. Hands drifting toward nose were quickly redirected to running through too-long bangs. Better to look nervous than itchin’.

It’d been too long since Twitch’d been on the streets – didn’t hardly recognize any of the faces peering up from the cardboard rooms and stairs. Only the suits hadn’t changed. Clipping along to their high-rises and coffee shops and bodegas.

Pro’lly one of them wanted the bag. Course maybe it was just a better place, more people, that anyone could get lost in. Damn city centers all the rage, if you listened to those talk radio reports.

Could just as easily been Frankie from 3 doors down. Twitch didn’t care, really, ‘cept to get the cash. Fat roll, should be. But never count it onsite. Remembered that much from days being a grunt for someone else.

Damn, felt like too many eyes around. Reporting back and out, maybe to the radio folks, or maybe to cops. Twitch tugged again at bangs, counting. Third can past Gloria’s with the faded paint. Stumble, drop one of the two brown bags next to the trash. Five more steps, tie shoe, retrieve bundle taped under the mailbox.

Twitch stood, rolling shoulders. Despite the mayor’s big talk on crime prevention, it was pie. Twitch sniffed, sauntered back to count the roll.

Not sure how I did conveying the three things I was supposed to for each character – feel like I drifted more into character voice, than anything. And apparently “marketplace” was the hardest missive of all.