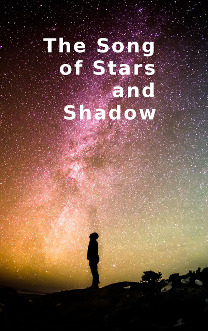 One good thing that came out of my unexpected change in my career trajectory, I got back into writing, and I’m talking actual words on page, not writing-adjacent activities. In November of 2018 I had started a novel for NaNo WriMo. With an understanding that I work better with external expectations these days, I solicited the help of a “Cheer-reader.” The reader was from a closed Facebook group for alumni of a specific annual workshop, a group I felt comfortable asking someone to read along as I wrote, tell me what they liked, and basically encourage me to keep writing.

Mock up cover of my WIP

This arrangement worked for a while, but then kinda sputtered at the turn of the year. I wrote a little in January, and then February happened. Not only was I turning my attention to LetterMo, a month long challenge to send a piece of mail each day the post runs in February, but mid-month challenged me further with my sudden shift in career.

My new position did not require much creative energy, so I threw myself back into writing with gusto. The real tipping point for me was when I decided upon, and registered for, the writing conference I would attend. June 2019 I registered for the Surrey International Writing Convention. Because I got my tickets relatively early after registration opened, my registration included a blue pencil session with an author, and a pitch session with an agent or editor.

I’ve never done a pitch session before, had barely considered what it entailed, but by gum, I had signed up for a session with an agent, and I was going to have a completed novel I could pitch.2 I was enjoying my work in progress, and I had a cheer-reader patiently waiting for the next segment, so I decided to have a completed first draft by the time of the conference, the last week in October.

I also wanted to get feedback from my online critique group, so my aim was to finish the draft by start of September, and have 3 or 4 sessions with my critique group getting feedback of portions of the work.

The reality was that I was writing until October 7th, and sent the last three chapters to my critique group to receive feedback at the next meeting, the Monday before SiWC (mind, I was flying up to BC that Thursday). And yes, that does mean I had submitted portions of my novel to my critique group for feedback while I was still writing the story. Clearly a stress-free experience.

But that external motivation worked, and I had a completed, critique-group read, first draft novel. My pitch session was on Saturday. Saturday morning I woke early (why yes, 5 AM in Surrey was essentially 8 AM at home, and my cats don’t let me sleep past 6 AM EST anyway). I realized I didn’t have a plan for the pitch session, and maybe I should have one, so I jotted down some notes in a slapdash kind of way.

I  am very comfortable talking with people, and as I’d painted this as a learning opportunity for myself, I talked with the agent at ease. Once I’d finished my pitch, she kindly told me that it may be hard to place the story, as the YA fantasy market was saturated at the moment, unless the story had more than just the genre to offer. I explained about the LGBTQ themes within the book, and she said “Next time, start with that.”  Then she started asking more in depth questions about the story, and as the 10 minutes was up, she handed me her card and asked for me to send a synopsis and the first 100 pages.

I am still a bit amazed at that response.

For me the difficult thing is that I no longer have a hard deadline to meet. I told the agent it was very much a first draft, and she said to get it to its best version, then send it. I have never considered editing my forte, and though I have awesome notes from my critique group, it’s been a slog to get started. But the positive pitch session made me realize I was at a point where I was leveling up as a writer, so I considered the year ahead, and what I could do to keep that progress going.

Immediately after SiWC, I submitted a synopsis and pages for consideration for the We Need Diverse Books (WNDB) mentorship program. I also began considering what new venues in terms of conferences and workshops I could look at. Most of the events I’m interested in are later in the year, but there was one in February – Life the Universe and Everything (LTUE) in Utah that I have had a growing interest in, though usually not in time to get tickets for a flight and reservations at a reasonable rate.

But one of the things I wanted was to see some of my writer friends again, and since my going on the Writing Excuses cruise again is growing less and less likely, this seemed like a good venue, as most of them attend LTUE as well. The cost of the 3 day symposium was $65, which is amazing, but I wasn’t sure I could justify the cost of the airline tickets and hotel for it.

I then got wind of the FutureScapes workshop, which happens the day after LTUE, in the same venue. This workshop is competitive, and you have to apply for entry before you register by sending a writing sample. I got in, and as soon as I had registered for this workshop, I registered for LTUE, bought airline tickets, and secured a hotel room.

I held off on doing any edits on my novel, in case I got the WNDB mentorship I would be starting with a fresh mind on it. In late December I was notified that I had not been selected for a mentorship in 2020.

I will be honest, it has been difficult to get back to work on my novel, in part, I think, because I keep telling myself and others that I don’t know how to edit. Add that to the lack of deadlines….

I did manage a pass through the first chapter, just in time for an 11th-hour submit to FutureScapes for critique. I will still need a synopsis and a query letter by the time the workshop starts, and these are things I’ve never tried before, so it should be a great learning opportunity.

I registered for the NYC Midnight Short Story Challenge – first round started yesterday, actually. Beyond that, I haven’t really mapped out the year beyond mid February, though I have made some strides in the writing adjacent field.

I decided that one resource that I’d had a year-long subscription to was not something I was actually likely to use, so I did not renew it. I did renew my subscription to MasterClass. I’ve taken a hard look at the newsletters I’ve been receiving from authors and publishers, and pared down to the ones I actually read.

I was good and did not offer my services for a project that had been mentioned in the past, but never initiated, because I recognized that was just another stalling tactic, no matter what good it may produce. Likewise, I have decided to not start transcribing the audio recordings of previous workshops and classes – another useful thing, another excuse to not work.

When I sat down to write this, I think I had more of an expectation of what my plan for this year was. I’m slightly disappointed that I do not, but also appreciate that by having a mostly open idea, with a few solid goals, I can adapt as I need. I just need a way to trick myself into some deadlines, and I’ll be good to go.

A meme that is in rotation for my desktop image proclaims “If life got harder, that means you leveled up.” All of my efforts above are an attempt to gain skills and build in practices to help me reach the next level, even though I’m still getting my feet under me in this one. 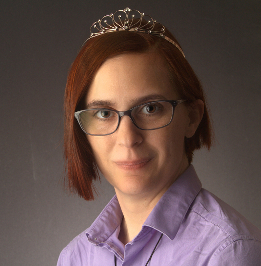 One of the other positive things from the SiWC was that I met Wendy McAlpine, an amazing photographer who was doing author headshots. Still on the high from my successful pitch session, I took the opportunity to get my portrait done. I was delighted with the outcome, and even more so when Wendy asked if she could use one of the shots in examples of her work on her website. I of course agreed. In the asking she mentioned she’d be happy to link to my website, should I have one. And it occurred to me that while CrushedMuffin is my site, and contains my thoughts, often about writing, if I am truly pursuing the next level, perhaps I should create a webpage for that.

So I am proud to say ChristyShorey.com is live, and some of my writing posts are, and will continue to be cross-posted there. The focus of that site will be narrower than this broad platform I’ve created. And, I’ve got a really awesome headshot for the page. 🙂 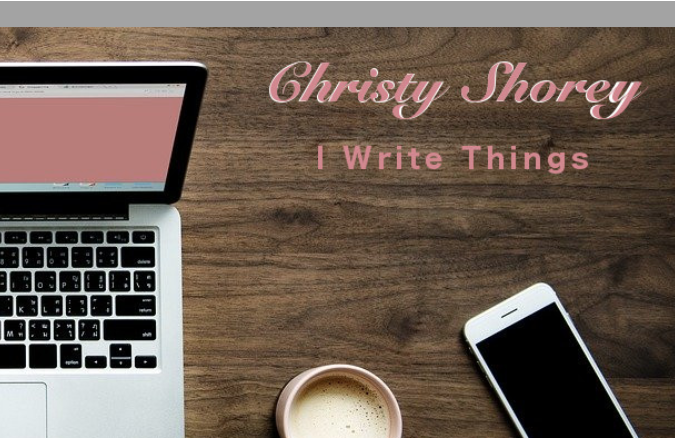 My author page at christyshorey.com