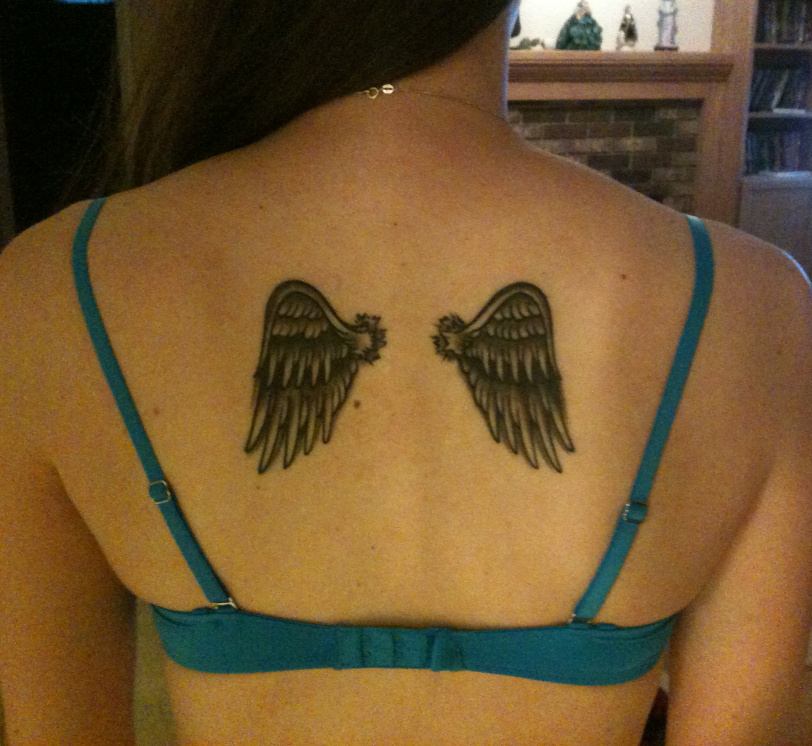 Sometime in college (1995-1999) the discussion about tattoos came up. I was firm in my conviction that I did not want, nor would ever get inked. The hypothetical “But if you were forced to, what would you get?” followed. I took the challenge seriously, and decided that if, IF I had no choice, I’d get Rurouni Kenshin, on the inside of my right ankle.

Fast forward to 2012. The conversation of tattoos has come around again, and I find that, despite my vehement objection of the idea, the span of 10+ years has seen me reconsidering the idea. Toby wants to get a tattoo, and thought it would be neat if we both went in for our anniversary and got inked.

I mulled it over for a bit, and determined that I wanted wings. I had a great debate with myself over what kind of wings I wanted. I had a pair of earrings that looked like angel wings; I liked the lacy, multi-colored wings of our ClareCraft Fairy Realm collection; I was enamored of dragonfly wings.

I ultimately decided on feather wings, that looked like they were coming out of my back. Unfortunately I did not retain the research I did for the wings, but I’d taken in printouts of about 8 different styles of wings, pointing out to the artist what I did, and did not want.

It was May 15, our 13th anniversary, and we stopped by Anthem Tattoo Parlor on our way to dinner. We talked with a couple of the artists, Toby with a picture of the symbol from the Dag Nasty album Wig Out at Denko’s he wanted on his calf. I talked with my artist about the wings I envisioned. As we wrapped up the consult, they asked if we wanted to make an appointment for the work. Toby turned to me and, trying to give me an out if I wanted, said “We’re headed to dinner, but we could stop back by after and schedule – What do you think?”

I replied, “we’re already here, let’s go ahead and schedule them.” I had already decided to go ahead.

Our appointment was on Saturday, and our friends Kate and Allyson accompanied us. Kate sat with Toby, and Allyson sat with me. I sat in a folding chair, my arms crossed so my hands were on the opposite shoulders to provide the best canvas. Bad posture for good art.

My tattoo took more than twice as long as Toby’s, as it included smaller detail, and intricate shading. As I sat, I talked with Allyson, the conversation helping keep my focus from the pain, though we pretty much re-hashed the conversation we’d had the night before, topic for topic.

Toby observed that I seemed to be doing better with the needle than he did, and his artist said, “Yeah, women typically handle the pain better.”

To me, though, the pain was worth it, what do you think?